SingleSpeed Brewery, Before and After 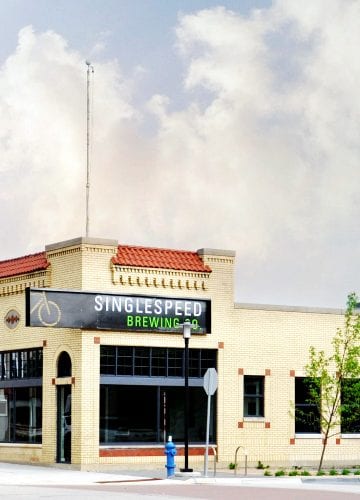 In November of 2015 several people from the Peters Construction team were joined by Owner Dave Morgan, and several members of the INVISION Architecture team for the first of many walk throughs of the old Wonder Bread Building (Soon to be new SingleSpeed Brewery), Downtown Waterloo, Iowa. Most of the ‘before’ photos shown in this post were taken on that day.

The exterior of the property received a complete historical make-under. The windows were taken back to the original opening, size, and location. All the brick was cleaned, repaired and tuck pointed where needed.

Although the interior was given an altogether new look and feel, the integrity of the building and historical aspects were kept in tact or re-used in many ways. On the footprint of where this original Wonder Bread proof box was located, they erected an area out of wood that was re-claimed from this project. This is a family area where people can hang out and kids can play with the now-re-purposed controls for the original bread oven, large chalk board, and many board games. Below is another example of how they re-purposed items from the factory. The old oven rollers were made into bike racks! The former Wonder Bread offices were turned into a gorgeous waiting area. The windows were opened back up to their original size. The original woodwork was beyond repair, however great care was taken to create something that looks original. This being SingleSpeed and unlike any other Brewery, the former delivery door now leads into an area designed for cyclists. People can ride right into the space and have a cold one. The space includes the bike rack made from reclaimed bread oven rollers, a map of all the bike trails in the area, a viewing area of the SingleSpeed brew tanks, and access to the restaurant and outside spaces. Of course SingleSpeed Brewery isn’t complete without an exceptional outside entertainment area. A portion of the structure that was added to the original building was demolished to make space for parking and the indoor/outdoor area that boasts walls that open, bar and table seating, and a stage for entertainment! To view more of the final photos of the project, head over to our project page.