Place to Play Playground Approved by the City of Cedar Falls 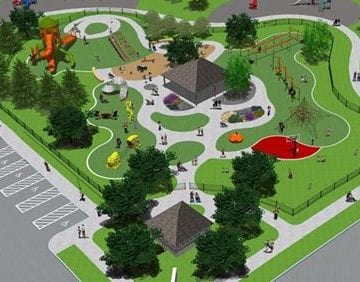 The City of Cedar Falls approved and accepted the low bid by Peters Construction Corporation for the Place to Play Playground project on Monday, Feb. 4, 2019. The Place to Play Playground will be an inclusive playground designed to provide children and families of all physical, mental, and social abilities and ages an opportunity to play together in an integrated, sensory-rich environment without the challenges that exist on a traditional playground including the surfacing. The playground will be located at Greenhill Park, and will feature five different types of swings, wheelchair accessibility, an orbital spinner, climbing structure, a zip line with buckets and a safety fence.

“We wanted to create a playground for EVERYONE where children of ALL abilities could play side by side” said Weichers. “Both Sarah and I have children with and without special needs. We found it impossible to take our children to the same playground: what was safe and fun for one of our children, was dangerous and inaccessible to our other child. There was a need that wasn’t being met and we decided to fix that!”

“Exposure to those that have differing abilities from an early age is so important,” said Corkery. “Place to Play Park is so much more than a playground. Inclusion matters and our hope is that other communities use this as a model for what they want in their own neighborhoods.”

“After more than four years of fundraising, we are thrilled to work with Peters Construction Corporation to make this dream a reality” said Weichers.

“We are extremely excited to begin work on this project” said Brad Best, President of Peters Construction Corporation. “Making a difference in the communities we work in is very important to us, and we feel this project is a great example of this.”