A Celebration at Single Speed 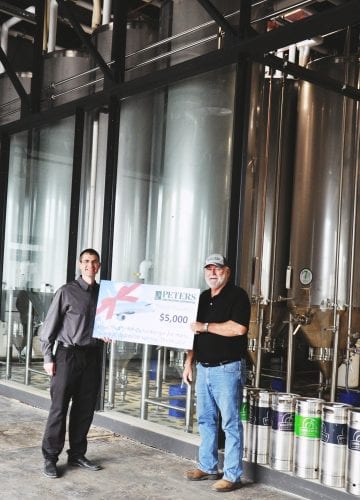 On Wednesday March 22, 2017 we gathered at the soon to be opened Single Speed Brewery located in the former Wonder Bread Building in Waterloo, Iowa to celebrate Jim Eichenberger. Jim retired from Peters Construction Corporation at the end of 2016 after 40 years of building the Cedar Valley with Peters.

Among those at the celebration were current and past co-workers, subcontractors that Jim has worked with through the years, friends, family, and colleges. After walking into the new entrance on the Southeast corner of the massive building, that covers all of one city block, people were greeted by Jim. If you know Jim at all, you won’t be surprised that the line came to a standstill on more than one occasion as Jim talked with many of his old friends and co-workers.  His signature laugh filled the room often during the afternoon. Jim was thanked for his many years of service by Peters Construction’s current President, Brad Best. He presented Jim with a $5,000 Travel Voucher.  There was also a collage of projects that Jim was the Superintendent for over the years, and his original application from 1974 on display. The beer hall, although still waiting on finishing touches, filled comfortably and people did not stray far from the expanse of the white granite bar.  As an added bonus to the celebration, we got to be among the first to have a beer poured from the new bar as we tasted 4 of the many signature brews that Single Speed is already brewing in this new location.  And we got to taste the very first pizza’s baked in the new high temperature pizza oven (can you believe it can cook a pizza in under 4 minutes!!). We all count ourselves lucky to have worked alongside Jim for so many years, and are so very appreciative for his dedication to Peters Construction. He will be missed, but we wish him the best as he moves into the next chapter of his life.